Congratulations to our Christmas hamper winners! 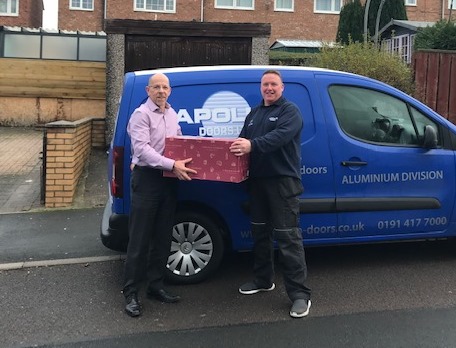 Christmas came early for two Glassolutions customers this week after they were chosen as winners of our luxury Christmas hamper draw.

Apollo Doors in Washington and Cleveleys Windows in Blackpool were the lucky recipients of two hampers worth over £150 each, which were delivered yesterday (Thursday 20th December) and included festive favourites such as a Christmas pudding, popcorn and Christmas crackers amongst a range of other treats.

To be entered into the draw, customers simply had to order online using the MyGlassolutions app between 26th November – 15th December before the winners were chosen at random on Monday 17th December.

Pictured are Damian Senior from Cleveleys Windows and Jason Chew from Apollo Doors.

Wishing you all a fantastic festive season and a prosperous 2019!