The creative scope of glass in pioneering modern architecture is perfectly illustrated in the stunning Glasgow Riverside Museum of Transport, in which Glassolutions played a key role.

The £74 million museum designed by Zaha Hadid – who designed Stirling Prize for Architecture winning buildings in both 2010 and 2011 – has been dubbed 'Glasgow's Guggenheim' and lies at the heart of an extensive redevelopment of 120 acres of the city’s riverside. Funded by Glasgow City Council and the Heritage Lottery Fund, the new museum replaced the Kelvin Hall Museum of Transport with a location to better reflect the city’s rich seafaring and shipbuilding heritage.

Zaha Hadid’s conception was a ‘flowing’ building which acts like a tunnel connecting the city and the river, open at two ends of a sectional, column-free extrusion. At the structure’s end-point with its eye-catching ‘zig-zagging’ zinc roof shape is a café and corporate entertainment centre with superb views for visitors over the point where the rivers Kelvin and Clyde meet.

The main building houses more than 3,000 objects on display, from skateboards to locomotives, paintings to prams, and velocipedes to voiturettes. These occupy a large circulation space which is up to 50m wide and split over two floors. Moored outside is the 19th-century sailing ship, Glasgow's Tall Ship, the Glenlee.

Glassolutions worked closely with the architects at the earliest possible stage – back in 2008 – to develop the specification for glazing to most effectively translate the concept into reality. Amongst the most important factors was natural lighting and the need to ensure this was optimised in the museum without excessive solar gain. This was coupled with a capability to deliver excellent thermal performance required to meet the building’s overall energy efficiency targets.

These functional requirements applied throughout the building envelope which features varying styles of glazing – from expansive clear glass facades with unbroken sightlines, to curved features and more routine window configurations.

Once the specification was agreed, Edinburgh based glazing and façade contractor Charles Henshaw & Sons was appointed and scheduled to install within the build led by main contractor BAM.

The products installed in the Glasgow Riverside Museum of Transport’s striking end façade are CLIMAPLUS units with solar control coating and dot matrix Seralit print. The photometric performance of the units was carefully specified by the architect and was very challenging with trying to balance the solar control against light transmission.

Being a museum the control of light transmission was very important to give the right environment in which to view the exhibits. To assist with solar shading and prevent too much glare from the summer sunshine and heat build-up, the south elevation glass was body tinted grey, screen printed with a dot matrix on face two of the glass and then using COOL-LITE SKN 154.

Iconic in its status, the completed Riverside museum has won plaudits from around the world and beat off stiff competition to win the prestigious European museums accolade, the 2012 Micheletti Award. It was named the most innovative museum in the fields of technology, labour and social history by the European Museum Academy.

The museum has proved a hit locally, nationally and internationally with more than 1.4 million visitors in its first year, and it is now one of Scotland’s most popular tourist attractions 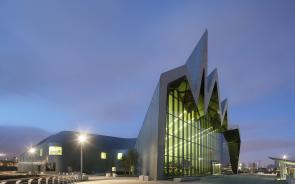 1 of 3
Riverside Museum of Transport, Glasgow 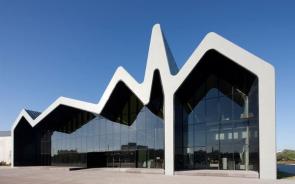 2 of 3
Riverside Museum of Transport, Glasgow 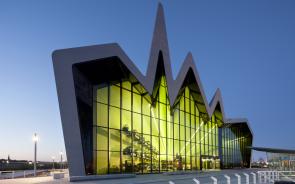 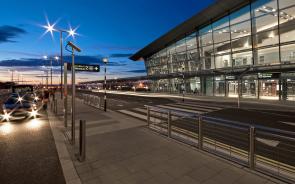 Solar control glass, which blocks up to 72% of solar heat by reflecting it to the outside